We're so confident MAXPRO will change your life we offer a 30-day trial period.

READY OUT OF THE BOX

MAXPRO is a full gym right out of the box, no complicated setup or install required.

We stand behind our product. We offer a full one-year limited warranty.

I have enjoyed this device from day one. Excellent concept. I like the portability, well built, easy switch from exercise to exercise. I especially liked the ability to change the weight with such ease. The resistance is great. I also like the Smart connect. It is great to be able to watch and record my workout. Thanks, for sure a great device.

I travel for work and sometimes I work late so I don't always get to go to the gym. I invested a lot of money into other traveling gym equipment and they may have done the trick but it didn't give the results I wanted.

Until Max pro came along and after doing much research on it ,I can say this is the best traveling home gym I could ever spend money on.
I don't need to carry all this extra gym equipment with me when I travel everything I need is right there in this machine.
I've used it quite when I can and even when I come home late I still am managed to pull out some reps on this machine.

So far I've had no problems with it but from what I've done on my research adjusting this machine is not a problem.
My advice to people who are thinking about it if you're going to spend this much money you better have 100% dedication to wanting to change your life.

The slim track amplifies the benefits of the Maxpro. It allows for greater resistance because of how securely it mounts to the wall rather than being strapped to a door. It also allows for easy vertical adjustments. I would highly recommend getting it, you won’t be disappointed.

I recently purchased the max pro and I am loving it. Since I haven't done any strength training in quite some time I have found the lowest setting for arms still a little heavy for a total beginner. I am female and a 5 lb start weight its a little much. I picked up a couple of 3 lb weights and have been using the app workouts with those. This week I will start using the max pro for arms as well. I think the app needs updating. I would really like to see it have the ability to airplay.

I was hoping for the same functionality as a cable machine. But it just isn’t smooth. It’s jerky and sometimes the weight is very uneven from side to side. I’ve read reviews about it breaking in…but when? Otherwise I do love that I can use the wall track to do all sorts of workouts and variations.

A
SmartConnect Portable Cable Machine Anthony P. (Palo Alto, US)
What I've been waiting for my whole life

I received my Maxpro in July 2020 and have been amazed. This thing is the real deal and I’ve had no problems with it. It is highly durable. Also, I enjoy the concentric style workouts and have still felt gains in my mid-30s. I would highly recommend this product to anyone.

Maxpro has changed my life

MaxPro is very good—just not quite great. Know this is a cable workout, it’s good—but its not free weights. Resistance is pretty constant, but there is always that initial but that just a tad off. The door mount can only be mounted on one side of the door and our door jams are deep—so the door mount will not work on all doors. The machine was not calibrated correctly when I received it—so MaxPro sent a video link to adjust—not complicated, but still an issue. The numbers on the dial are not really indicative of a weight setting—it’s just a number. The app is super impressive—but not so great when using free weights and cables in a workout. The app is well thought out and works really well—impressive

The first machine I received the battery did not work—I had to return it to MaxPro, but they would not send a new one until the old one was received. Maybe look at what Apple does, Levenger, other companies that put a hold on the dollar amount until received. Just sad to have it not work—have to return and then wait longer—there is a better way to take care of customers.

In the end, I like it—just don’t love it. I don’t regret the purchase as I think it is probably the best matching of it’s kind out there. I’ve had it for about 3 weeks—use it often. The machine is well made, the bench is fine—but not as good as my other weight bench—moves a little bit, so I hope it lasts.

Using the MaxPro on a door was good and fantastic for travel but having the wall track mounted at home was a complete game changer as it added speed and stability to whatever exercise I wanted to do. It really opened limitless possibilities! It's a must have!

I put off ordering this bench for quite some time. I have another one, but it just wouldn't hold the max pro well if the weight was heavy. I should have just bought this from the get go. It's heavy duty but soft and comfortable. Easy to do a wide range of exercises.

I really love this machine! It’s compact and great for a total body workout. I love the videos on IGTV.

I love this bench!!! It's perfect for so many exercises! Chest press, pullover, leg abduction, donkey kicks and you can even use it like a pilates machine. It's also super comfy and cushiony!

I bought the MaxPro Foldable Bench because I didn't want my home to look like a weight room. (I already have one piece of equipment that can't be put away.) I use it then stow it in my linen closet until next time. I have since learned the MaxPro cable system is highly rated by Shape magazine and a number of online fitness writers. I love the bench and now believe I need to get the MaxPro SmartConnect so I can get rid of my barbell. Still need the dumbells to prop the door open on a windy day.

R
Foldable Bench Randon S. (Oklahoma City, US)
Good but not great for the price

The bench is good but for $200 it should let you have an incline and decline function. It would also be cool if it had a foot hold for sit ups. It is a real basic bench with a very high price tag.

I love the workout bench. It makes it so I can add a lot more resistance to my chest workout.

I love the MaxPro with the wall track. I wish, I wish, I wish... they had a back pad that attached to the wall track for doing standing bench-press-like exercises. Having had a past abdominal surgery, the bench isn't as good for me as doing these exercises standing. Make it happen MadPro! Great product so far!

Pretty solid for a foldable bench and it works perfectly for the small space we have it in.

Overall, this bench is great quality and I can use it for weights as well. It also increases number of exercises I can do on MaxPro. The one thing that probably needs addressed is when using a high weight setting on MaxPro, on some exercises if your not careful the bench can pull off of because of the force required to lift. Sometimes your body weight will be enough to hold down, but there are a couple exercises you can’t do this for. But still good product.

I love it! Works well on the door and I got a extras so I can keep one in my backpack so I can anchor it to a tree when I’m out in a trail. 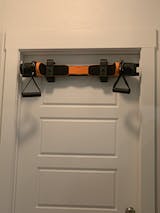 I really like my MaxPro. I've only had it for a couple of weeks but so far so good. I love the versatility of it. My wife loves that all of my weights are off of the floor of our bedroom.

I have used resistant bands on my door and never really liked it. This was one of the selling points for me. This is a great addition to the MaxPro.

When I say the max pro is worth, it's worth it, ignore all the haters out there, if you have a busy life like myself or tired of going to the gym or wanna cut monthly memberships I strongly recommend you get a max pro!!!! 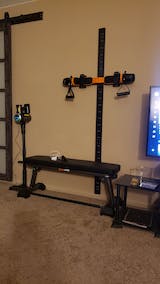 B
Foldable Bench Buddy (Houston, US)
Bench is solid and stable

The bench is solid and stable. Folds up easily to toss in closet when not in use. Cover material and foam seem to be decent quality. Should hold up well.

We Are Your Cable Gym, Reinvented

Forgot everything you think you know about home gyms. The MAXPRO SmartConnect brings you the  latest revolutionary fitness technology in a Powerful Cable Machine that replaces an entire gym without needing all that bulky and expensive equipment.

We're not some stretchy rubber band tied to a door, our patented power clutch system is built with cables 15x stronger than steel by weight to withstand even the most powerful workouts.

Exclusive access to the MAXPRO Coaching App is included with your purchase.

We Are Your Cable Gym, Reinvented | Guaranteed to Build, Burn & Tone

Forgot everything you think you know about home gyms. The MAXPRO SmartConnect brings you the  latest revolutionary fitness technology in a Powerful Cable Machine that replaces an entire gym full of bulky and expensive equipment.  We're not some stretchy rubber band tied to a door, our patented power clutch system is built with cables 15x stronger than steel by weight to withstand even the most powerful workouts.


Exclusive access to the MAXPRO Coaching App is included with your purchase.  Connect the SmartConnect to the MAXPRO App via Bluetooth to track your workouts & monitor progress to help you reach your fitness goals. Follow along with professional trainers for fun and engaging workouts or create personalized workouts and discover new exercises. Following MAXPRO’s design ethos of minimalist design with maximum capability, the SlimLine Wall Track is the embodiment of engineering art!

The strong and powerful design looks good on any wall, doesn’t take up any floor space, yet instantly turns any room into a gym!

Precision engineered using high-strength extruded aluminum rails that mount directly to one wall stud. MAXPRO’s exclusive one-button up/down operation allows a smooth and quick transition from one exercise to the next in less than 3 seconds.

*The SlimLine Wall Track is designed for wood stud installation. The MAXPRO Foldable Bench expands the versatility and capability of what you can do with your MAXPRO— from bench presses and step-ups, to rows and lat pulls. The bench has a total weight-bearing capacity of 750lbs which includes the 300lb resistance capacity of the MAXPRO.